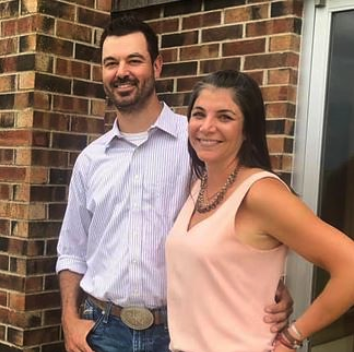 Let’s visit a birthplace – not of a president or a general, but the birthplace of a cattle breed. Today we’ll learn more about an innovative family that helped develop a new breed of cattle in rural Kansas.

Last week in this column, we met Dirck and Natalie Hoagland of J&N Ranch near Leavenworth. Dirck’s parents, Joe and Norma Hoagland, bought the place near Leavenworth in 1985 and have expanded operations since. For years, they raised registered Hereford cattle.

Hereford cattle are recognized for having a white-colored face and a red-colored body. During the 1990s, the Hoaglands and their friend John Gage had the idea of trying to breed Herefords that had the traditional white face but were black in color.

To traditional cattle producers, the name black Hereford might sound like an oxymoron – a contradiction in terms, like jumbo shrimp or single option. Yet these breeders wanted the carcass quality and market premiums of black Angus, while retaining the hardiness, docility and versatility of the Hereford breed.

They did so using the same process as that used by other breeds; namely, by introducing Angus genetics and then selecting for black hair color in the descendent generations.

When Joe Hoagland’s friend, John Gage, passed away from cancer, Joe purchased cattle and records from his estate and established the Black Hereford Registry in the barn office at the J&N Ranch in 1999. Joe and Norma registered the first black Hereford and purchased the first membership in the American Black Hereford Association.

As the association grew, the breed headquarters moved from J&N Ranch to a Kansas City office in 2011. In 2017, Joe and Norma were inducted into the American Black Hereford Association Hall of Fame. Today the association has 500 breeders in 45 states plus overseas. All of these trace their cattle lineage back to the J&N Ranch in Kansas.

Joe and Norma’s son, Dirck, and his wife, Natalie, now operate J&N Ranch, which continues to be a major producer of black Hereford cattle. Bull and heifer development takes place at the ranch near Leavenworth. Their summer pasture is in Wabaunsee County at the Hoagland’s Gun Barrel Ranch, located near the rural community of Eskridge, population 439 people. Now, that’s rural.

The Hoaglands recently received a Kansas Wildlife Habitat Conservation award from the Kansas Department of Wildlife and Parks for their work to improve prairie chicken habitat on the Wabaunsee County ranch. In this case, improving habitat meant removing trees so as to reduce predator risk for the prairie chicken. “We believe that we should protect the original species on the prairie,” Dirck said.

J&N Ranch has two production sales yearly, selling bulls and females. Their breeding stock is sold across the Midwest and beyond. They’ve sent bulls as far east as Pennsylvania and as far west as Hawaii.

“One of our favorite things is delivering bulls and seeing our customer’s operations first hand,” Dirck Hoagland said (although the bulls that went to Hawaii were shipped by plane, so it sounds like the Hoaglands missed out on that trip). “It’s great to travel around and see how our genetics have benefitted our customers’ herds.”

Dirck and Natalie have two boys, Dayton and Reed, ages 10 and 8. The Hoaglands value their rural, agricultural lifestyle deeply and seek to pass it on. “Natalie and I were very lucky to be able to come back into our family operation,” Hoagland said.

“Our one driving goal is to give these two boys the opportunity to live this life on the ranch if they choose to do so,” he said. “We want to be able to provide this opportunity to the next generation.”

It’s time to leave this birthplace – the birthplace of a cattle breed. We commend Joe and Norma Hoagland, Dirck and Natalie Hoagland, and all those who are making a difference at J&N Ranch.

This ranch built more than a cattle breed – it built innovation, commitment and family.