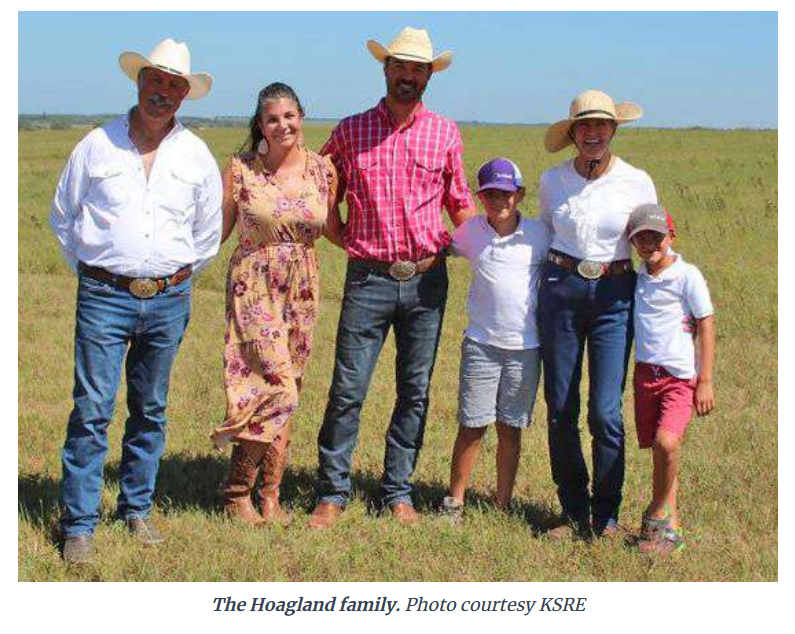 Today let’s learn about a cross-section of agriculture. Let’s talk to a cattle feeder, a timber producer, a crop farmer, a stocker cattle grower, and a beef seedstock producer.

To cover all of these, we could bring together a panel of people from across the state. Or, we could meet a single innovative family which has diversified into multiple segments of the agriculture industry.

Dirck and Natalie Hoagland of J&N Ranch are owners of the family operation that includes multiple components of agriculture. It began in 1866 when Dirck’s ancestors homesteaded near the rural community of Tecumseh. The population of Tecumseh and the nearby areas is 696 people. Now, that’s rural.

“We still own part of that original farm ground,” Dirck Hoagland said. Known as the Decker Farm, it is mostly native prairie that is now leased to local producers.

Hoagland’s parents, Joe and Norma Hoagland, started raising registered cattle in 1978. In 1985, they bought a ranch along the Missouri River near Leavenworth and moved their cowherd to that site. Using their initials, the place was named J&N Ranch. Later, the Hoaglands acquired the Gunbarrel Ranch in Wabaunsee County and the F. Morgan Feedyard near Leavenworth.

Dirck earned a baseball scholarship and became a pitcher at Tulane University, even pitching in the College World Series. After graduation, he moved to Brussels, Belgium, where he earned an MBA before coming back to the states. He met and married Natalie, who had majored in education at K-State. They have two boys, ages 10 and 8.

Hoagland worked in the corporate world in downtown Kansas City for five years but found he missed ranch life.

“I was always drawn to the ranch,” he said. Hoagland decided to leave corporate life and move back into the day-to-day operations of J&N Ranch.

The main J&N Ranch is located along the Missouri River near Leavenworth. This includes timbered hills and productive river bottom ground. The land includes fine hardwood trees that are a source of timber harvesting.

J&N Ranch has native stands of oak, ash and walnut trees along three miles of land along the Missouri River bluffs.

The ranch’s river bottom farm ground is a fertile location to produce corn, soybeans, and hay. This is also where they develop and evaluate their bulls and heifers to be sold or retained. That provides a complementary setting to the open rangeland of the Wabaunsee County ranch.

“We work the two ranches together,” Hoagland said.

The cowherd will go to pasture at Gunbarrel Ranch for the summer and then come back to Leavenworth for the winter. “We have more grass in Wabaunsee County than we need for our cowherd, so we use that extra capacity to run steers as a stocker operation or for a bred heifer program, depending on the market,” Hoagland said.

The registered cowherd is a source of bulls and heifers for other cattlemen. Production sales are held twice yearly, plus semen is available. The Hoaglands have done pioneering work in the development of the Black Hereford breed. The F. Morgan Feedyard for finishing cattle is located near the home ranch as well.

All of that means that the Hoaglands are active in every segment of the beef production system, from cow-calf to stocker cattle to finished cattle. “We’re involved in all segments of the industry, and what we’ve learned from that helps shape our production system,” Hoagland said. “I want to be in the shoes of someone in every step of the way so we can see what works best.”

For example, observing how cattle perform in the feedyard helps assure that the Hoaglands raise the right kind of genetics in the cattle seedstock that they produce. “We want to raise cattle that work for producers in the real world,” Hoagland said.

We commend Joe and Norma Hoagland, Dirck and Natalie Hoagland and their family for making a difference through hard work and diversification in various sectors of agriculture. One could say that they really have it together.

And there’s more. Remember the reference to the Black Hereford breed? We’ll learn about that next week.

For more information about the Huck Boyd Institute, interested persons can visit www.huckboydinstitute.org.